The plastic bag ban of Prince Edward Island is not until July 1, 2019, but Islanders are already reducing their plastic bag usage.

The ban on plastic checkout bags is still more than seven months away but P.E.I. businesses and consumers are already making the switch away from plastic bags.

We’ve seen a gradual but steady increase in people bringing their own containers.— Bill McGregor

The Plastic Bag Reduction Act comes into effect on July 1, 2019, making P.E.I. the first province to ban the bags, commonly referred to as checkout bags.

“Many of the businesses have already chosen, for customer response reasons, to move away from plastic bags — so it’s already started,” said John Hughes, director of special projects with the P.E.I. Environment Department.

“I’m surprised at how generally positive both the consumer and the businesses have been.”

Some of the stores that have started charging for plastic bags on P.E.I. include large retail chains such as Walmart, Giant Tiger and Bulk Barn.

“Lots of times they don’t need a bag and we’re encouraging Islanders to begin now, even though this doesn’t come into force until July first,” Hughes said.

“I think many people are probably like me — my trunk is full of them — or I leave them at home. So part of this is just to get used to bringing the reusable bags with us.” 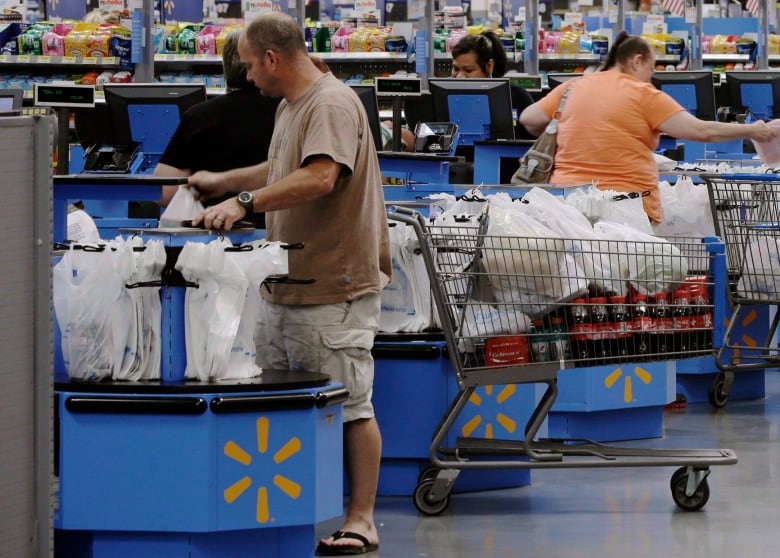 Walmart is one of the retailers that is charging for plastic bags on P.E.I. (Danny Johnston/Associated Press/Canadian Press)

But when next July begins, customers will no longer receive plastic bags, and will have to pay for other bag options.

According to the act, recyclable paper bags can still be provided at a cost of no less than 15 cents and reusable bags at no less than $1. Businesses can charge more, but not less.

“If we have 30 million plastic bags, we don’t want to replace them with 30 million paper bags,” Hughes said.

“The goal is to increase the use of reusable bags and to eliminate the use of plastic bags.”

People can always bring their own reusable bags — free of charge.

“I don’t think we’re going to see a lot of negative push back,” Hughes said.

The Bulk Barn in Summerside has been part of a national program for bringing in reusable containers for a year and a half.

Customers are encouraged to bring containers from home, have them weighed, then fill those containers — eliminating the need for plastic bags.

“I think the reaction has been positive for the most part, we’ve seen a gradual but steady increase in people bringing their own containers in,” said Bill McGregor, franchisee for the store.

“It’s a matter of training yourself and assembling your collection of containers, and I expect it to just continue.”

Bulk Barn also has a small charge surcharge for plastic carryout bags: 5 cents for a large, 4 cents for a small.