An oceans and plastics campaign by Greenpeace Canada finds the largest amount of litter came from brands such as Nestle and Tim Hortons. Greenpeace believes that companies that make these products should be responsible for their disposal and not the consumer exclusively. 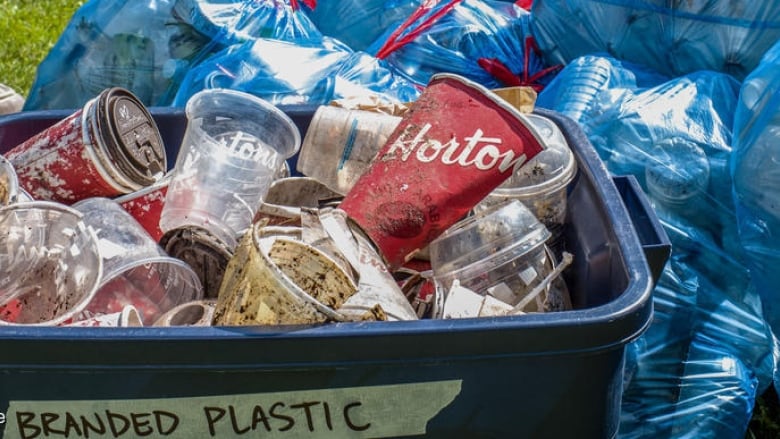 For World Cleanup Day on Sept. 15, Greenpeace co-ordinated a cleanup activity and plastic polluter brand audit in several Canadian cities, including one in Toronto’s Don Valley. Nestlé and Tim Hortons were the top two companies responsible for the branded plastic found. (Stan Williams/Greenpeace)

Much of the plastic trash cleaned up from Canadian shorelines by volunteers in September could be traced back five companies: Nestlé, Tim Hortons, PepsiCo, the Coca-Cola Company and McDonald’s, an audit led by Greenpeace Canada has found.

Greenpeace and other environmental advocacy groups working on the international Break Free from Plastic campaign looked for branding on 10,000 litres of food wrappers, plastic bottles, plastic-lined coffee cups and other trash collected in Vancouver, Toronto, Montreal and Halifax during World Cleanup Day on Sept. 15 and counted the results as part of their first Canadian plastic polluters brand audit.

Sarah King, head of Greenpeace Canada’s oceans and plastics campaign, said its first brand audit was in the Philippines last year because the group found that cleanups could only do so much.

“You do a cleanup one day, and the next day the beach is filling up with plastic again,” she said. “We really wanted to look at the companies that were responsible for the bulk of this trash that we were finding on the beaches.” 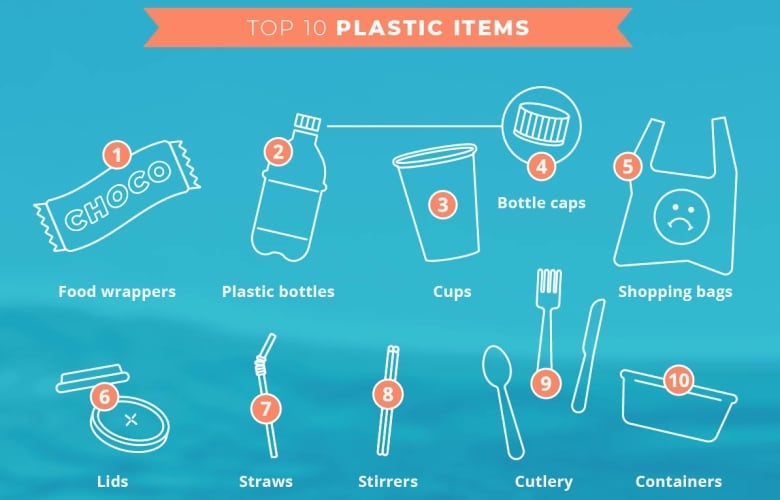 These are the top 10 plastic items found during shoreline cleanups across Canada on Sept. 15. (Greenpeace Canada)

Many of the companies have multiple brands — for example, Nestlé sells treats ranging from Drumsticks ice cream cones to Aero and Coffee Crisp chocolate bars, along with bottled water under brands such as Aberfoyle and Montclair, and PepsiCo makes Quaker granola bars and Frito-Lay chips. 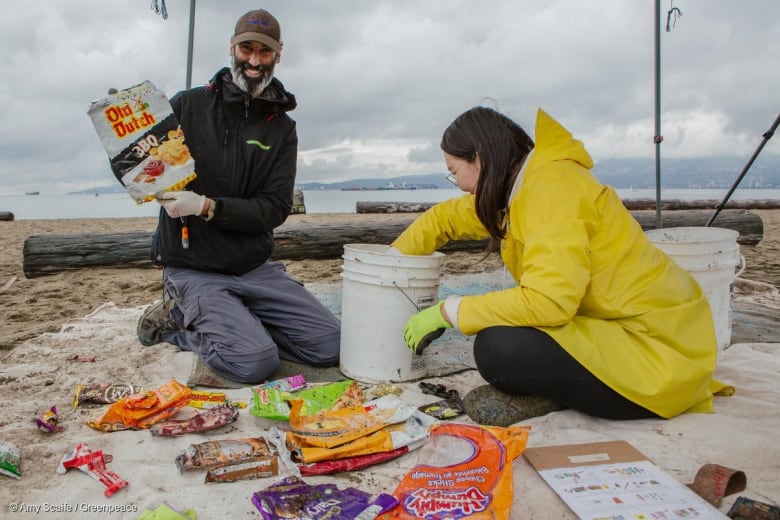 When brands were counted instead of the companies themselves, the top offenders, accounting for 40 per cent of identifiable trash were, in order:

CBC has reached out to the five companies cited in the Canadian audit.

In response, Tim Hortons said in an email that  is working on a packaging strategy that takes into account its environmental footprint.

Nestlé suggested in an email that the real problem was improper disposal, saying the results “demonstrate a clear and pressing need for the development of proper infrastructure to manage waste effectively around the world.”

It added that the company’s goal is to make 100 per cent of its packaging reusable or recyclable by 2025, and it is also exploring packaging solutions with its industry partners to reduce plastic usage and develop new approaches to eliminating plastic waste.

Recyclability not the solution: Greenpeace

King thinks much of the trash found during cleanups may have been disposed of properly, but spilled into the environment by wind or storms.

Based on the Canadian results, she added, it didn’t seem that easily recyclable items, like plastic bottles, were less common than ones that are more difficult to recycle, like coffee cups or food wrappers. 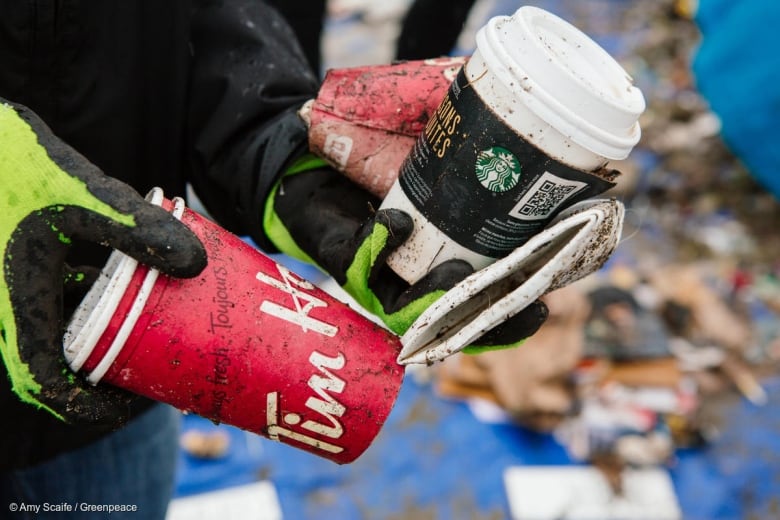 Many of the companies cited have more than one brand. When Greenpeace looked at brands only, both Tim Hortons and Starbucks made the top five. (Amy Scaife/Greenpeace)

She hopes the findings of the audit will have an impact on the companies that were responsible, and get them to recognize that simply making single-use plastics recyclable isn’t the solution.

“We really want the companies to recognize, ‘Look the efforts that you’ve made or that you’re stating that you’re making aren’t good enough.’ You actually have to reduce your production of these products if want to be sure that they’re not going to be ending up in their environment, in our oceans and polluting communities.”

King firmly believes that it’s the companies that make the products that should be responsible, not the consumer.

“We aren’t given a lot of options for buying food and household products in plastic-free packaging,” she said.

She thinks consumers can have the biggest impact by pushing companies for reusable and refillable alternatives to single-use plastic packaging. 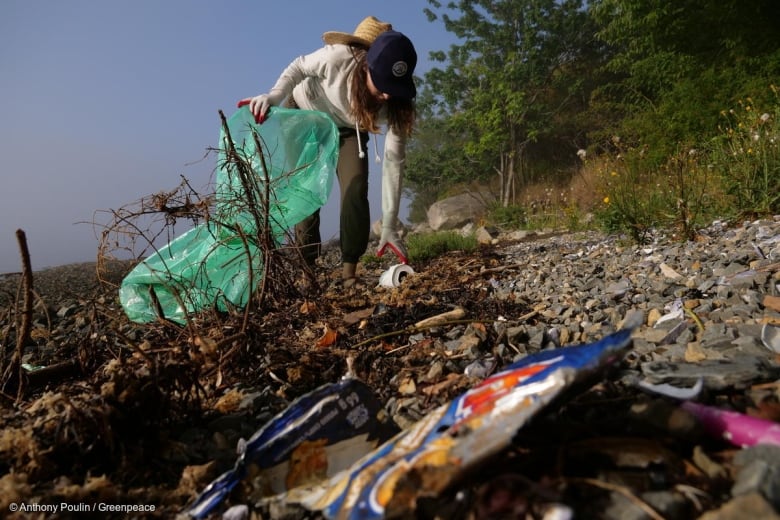 A World Cleanup Day volunteer collects trash in Halifax. Greenpeace said it didn’t seem that easily recyclable items, like plastic bottles, were less common than ones that are more difficult to recycle, like coffee cups or food wrappers. (Anthony Poulin/Greenpeace)

Dirk Matten, a professor who holds the Hewlett-Packard Chair in Corporate Social Responsibility at York University’s Schulich School of Business, said he thinks Greenpeace’s audit is a “very skillful and effective” way to address plastic pollution.

“These companies actually use plastic that contributes to this massive problem to deliver their products and, I think by this, are forced to think about a more environmental friendly way of doing this,” he said.

He added that Greenpeace’s report could influence organizations like governments and universities in their purchasing decisions.

“To the corporations, I would say don’t fight it,” he said. “Collaborate, address this constructively.”

He added that Greenpeace is an international organization with a lot of experience that could be used as a resource in finding solutions.

As for consumers, he says, they should also be disciplined about their use and disposal of these products.