A Lunenburg environmental group pushes for town council to place a ban on single-use plastics in town. The group also shows that local businesses would support a ban motion.

An environmental group in Lunenburg is gathering community feedback in an effort to persuade town council to put bans on single-use plastics.

Plastic Free Lunenburg is hosting a series of open house events to drum up support for using less plastic and to help answer questions from both citizens and local businesses. 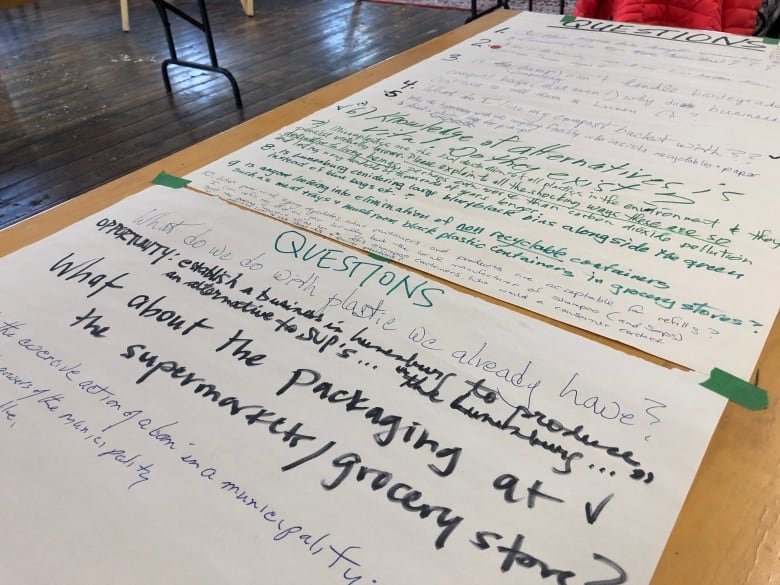 Community members were invited to write down questions about how they can limit their single-use plastics.(Emma Davie/CBC)

“The support that we’re hearing from folks is that what people want to do is refuse and avoid these products in the first place,” said group member Teresa Quilty.

“We really have a plastic crisis globally and it might be easy for us in Nova Scotia to think that we’re not part of that, but we are.”

Jesse Robson was one of several people who stopped by Plastic Free Lunenburg’s open house on Sunday. She wanted to learn more about reducing her own plastic use.

“I think it will require a cultural shift,” Robson said. “We’ll all need to start bringing Tupperware places and using our own mugs, that sort of thing.

“But if we’re all in it together then that’s great.”

Last week, the group held a public meeting where 200 people turned out to vote on reasonable timelines to ban items such as straws, plastic bags and single-use condiments in the town.

Quilty said with the heavy tourism influx in Lunenburg during the summer months, there is a lot of plastic use when it comes to items like take-out containers.

But she said businesses have shown a willingness to reduce the single-use plastics in their stores. They want information on where they can get things like metal straws and compostable take-out boxes locally.

“What we heard from them was support for a bylaw in the town because it would create a level playing field,” she said.

“We’re working really hard to make sure everybody’s voice is heard during this process.”

Jennifer Constable with Plastic Free Lunenburg said the turnout from the community shows that people are enthusiastic about the process.

But the group’s plan is to eventually have council institute bylaws to reduce single-use plastics.

“If everybody did the right thing all the time, sure, we wouldn’t have to have a ban,” Constable said. “But that isn’t the case.

“So I think that the reality is it has to be some sort of a legislative ban.”

Constable’s family went plastic-free last year. She said there are simple things people can do to get started, like using reusable mugs, water bottles and bags for grocery and produce.

“I think you find that once you stop using single-use plastics, you wonder why you ever did. Because it’s pretty easy to do.”

The group will hold two more open house events this week and plans to get back to council in late March.