Even though black plastics are labelled with a plastic resin code it does not mean it is recyclable.

Some restaurants and cafes are looking for new suppliers and even rebranding after finding out that the black plastic containers and lids they’re using aren’t recyclable in Toronto.

Those iconic black coffee lids you get at Balzac’s will soon be a thing of the past, after owner Diana Olsen was told the lids don’t belong in the blue bin, but instead in the garbage.

“It matched with our branding and it looked a little more edgy,” she said. “But it turns out that no type of black plastic is recyclable.”

That’s because unlike other plastics, the market for black plastics is really small, so it’s costly to sort with little or no reward.

“You can only turn it to other options that use black plastics… whereas clear plastics can become any colour.”

There’s also another problem: even if the city wanted to recycle black plastic, it wouldn’t be able to. 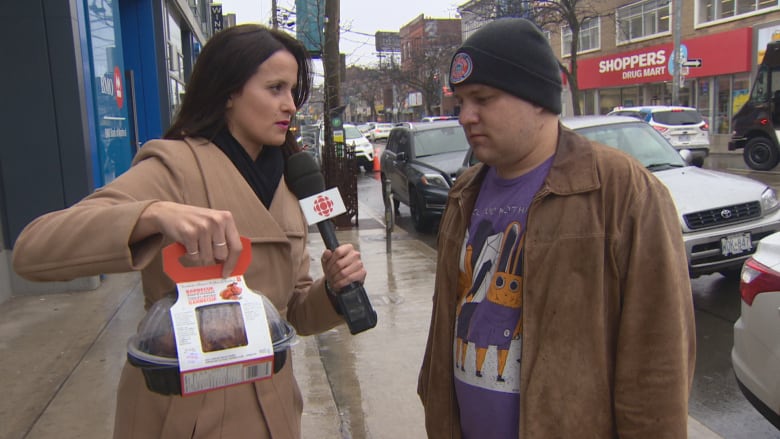 Most people CBC Toronto asked on the street weren’t aware that the bottom part of the rotisserie chicken container belongs in the garbage and not the blue bin. Source: Christopher Dunseith/CBC News

The city is working on a solution, but in the meantime, black plastic is ending up in the blue bin and that’s contaminating the entire lot.

McKay says in the last few years the city’s contamination rates have increased by 25 per cent and each percentage point hike costs anywhere from $600,000 to $1 million a year in “processing fees and a decrease in revenue from the sale of recyclables.”

Many confused by labelling

Most of it’s ending up at the recycling plant because the labelling is confusing, the black plastic has the tiny recycling symbol on it, throwing most people off.

Jeff Regular and his wife Nuit run the popular downtown Thai restaurant Pai. He says they initially chose sturdy containers with clear tops and black bottoms because they thought they were making an environmentally conscious choice that would also be good for the consumer.

Put black plastic in the garbage

But the change is costly and time consuming. Olsen, the owner of Balzac’s, says it took her a few months to find the right supplier for her coffee lids and cups.

“We’re also going to be going to a biodegradable cup,” said Olsen, pointing out that most coffee cups aren’t even recyclable.

For right now, the city is urging anyone who uses any type of black plastic, including garbage bags, to put it in the trash, not the blue bin.

McKay says Toronto isn’t planning on banning black plastic but it will be reviewing options to reduce the use of single-use items such as bags and plastic takeout containers.

If you have questions about which type of plastic you can put in your blue bin, the city has a handy tool called the waste wizard.